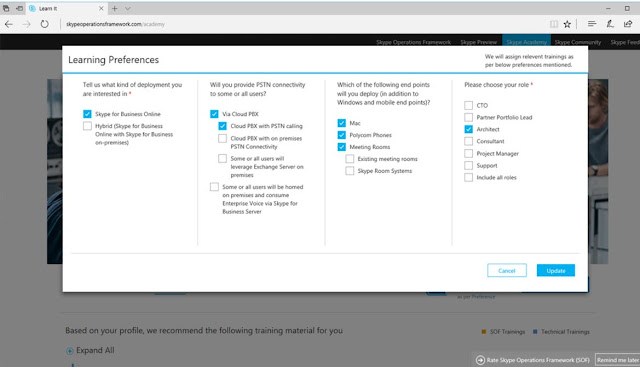 Skype for Business Busy Options: under the hood (sort of) part 1

Busy on Busy AKA BoB (or, more accurately as per Microsoft's wording, Busy Options) is a somewhat obvious feature in any PBX and, generally speaking, in the PSTN communications world. Initially, it was as simple as bouncing back a "busy signal" tone to the caller, but it then evolved in more pervasive features like send to voicemail, or the various mainstream "call back" functions in the mobile telephony world (e.g., if you call a busy number, you'll receive a text when it becomes available). Whatever the action is when the callee is busy, everyone expect some form of call treatment in such scenario. The purpose is clear at both ends of the wire:
Whilst Microsoft Lync and then Skype for Business have now established as a real time communications platform with rich features in the PSTN world (I am purposely avoiding the overused and misleading PBX replacement cliché), Busy Options were never part of it until the Skype for Business July 2016 Cumulative Update. Before then, it was only achievable through MSPL scripting or third party solutions.

The reason why it took so long before the feature was implemented is unknown, but one thing worth saying: it must have been not a trivial at all feature to implement, due to the complexities for the relevant algorithm to determine whether the user is actually busy or not before applying one of the two available "treatments":
Consider the following:
At the time of writing, I was unable to identify any low-level documentation around the Busy Options, so, in an attempt to try to find out more about how it works under-the-hood, I have leveraged the informational messages of a verbose trace with the specific (and new) scenario and here are my findings.

The analysis you're about to view is based on a log trace with the Centralized Logging Service using the specific Busy Options Scenario. I recall, the Busy Options are included in the July 2016 CU; the implementation involves several tasks as described in this TechNet article and consist of:

This is the commented log of the audio session. I have stripped out a few lines and highlighted the key sections for better readability:


BoB checks if Busy Options are enabled and the output is TRUE:


BoB checks if there is at least one voice policy enabled for Busy Options and the output is TRUE:


BoB checks on the user details, at this point you should have noticed the Busy Option is DISABLED for the callee (and the caller), however, BoB carries on with further checks:


BoB checks if it's a Team Call. The results is FALSE for all checks, confirming this is not a Team Call:


BoB checks if it's a Response Group call. The result is FALSE for all checks, confirming this is not RGS-related:


Bob checks if it's a parked call, or a delegate call. The result is FALSE for all checks:


BoB checks if it's a conference call:


BoB checks if call forwarding or simultaneous ring is enabled:


BoB checks if this is a re-invite. If you'd like to know more about re-invites, what are these and when/why they are issued then check this blog:


BoB checks if the call should be prioritized, based on the specific type, as we've seen, this is just a normal inbound call to a "vanilla" user who is not in any of the scenarios above:


Next few lines in the log seem to be a summary of the findings so far:


Finally, like we already saw, both caller and calle's do not have busy options enabled, therefore the call is passed through without further processing:

The main takeaway from this brief analysis is understanding what type of interoperability you should expect from the Busy Options in various voice applications. Busy Options will apply to calls make to you as an individual user. It will not apply in case of:

Busy Options work irrespective of the client or device the user logs on to (unlike SLA which only works on VVX phones).  Additionally, if you are logged on to multiple devices and are engaged in a call on one, this will be taken into account and the second call will be rejected.
If you get a call while busy and it is rejected, you will get a missed call notification.  Callers will see a notification that you are busy on another call.

In the second part of the article, I will analyze what happens when users are enabled for Busy Options.

Skype for Business client was released on September 2015, and featured a number of new functionalities, as well as some discarded ones, as described here. The one I'd like to talk about is quite under-the-hood, but potentially important.

What you will not find in the article above (but you would have probably hoped for), is that the new client got support for the legacy (v6) ICE removed.
ICE (Interactive Connectivity Establishment) is, in simple terms, a set of protocols (STUN and TURN) used to facilitate media connectivity establishment for endpoints under various restricted network scenarios (e.g. when not directly routable, behind a NAT or firewall). If you'd like to know more, please refer to this excellent resource.

ICE has gone though several iterations. Until OCS 2007 "R1", only ICE v6 was used. OCS 2007 R2 introduced the new and more efficient ICE v19 version, but v6 was maintained for backward compatibility until the SfB 2015 client.

The implications of such change lie with intercommunicating with legacy systems because OCS 2007 "R1" and Exchange 2007 UM only understand ICE v6; so, expect issues if you need to interoperate with these systems. Examples:

In case you are wondering, I haven't discovered anything new so I am just broadcasting. Credit goes to this blog and to Mastering Skype for Business 2015 book by Keith Hanna. Both are great reads to know more about the issue. Only, despite the potential implications, this doesn't seem to have been in the headlines (or perhaps I just missed it)?

A trace analysis from a Skype for Business 2015 server with the latest July 2016 cumulative update reveals both v6 and v19 ICE are presented in the call negotiations (some servers are also ICE clients).
Posted by Unknown at 17:38 1 comment:

Busy on busy (or second treatment) is a neat and long-awaited feature that was eventually added in the Skype for Business July 2016 Cumulative Update.

For more info about BoB, what is it, how it works please check this blog by Randy Chapman.

Not surprisingly, a number of performance counters have been added to help monitoring and troubleshooting. Counter definitions can be found here:

Used to do Low Level Designs for Lync deployments using some "crap" spreadsheets and "manual" validations, Alessio challenged me to help him improve his spreadsheet using some VBA and other Excel tricks.

A while after that we decided to make it available online (http://bit.ly/1BjRaCQ) and prepare ourselves for the web criticism and hard reviews.

Well, it was a massive surprise that the number of downloads is still going up, it receives good reviews and amazingly it has inspired another online project. Even Microsoft @SkypeBusiness tweets the tool.

After 10000 downloads everything we change requires more care and planning because the responsibility is bigger every day.

Why do I waste my time doing it? I believe on Adam Grant's book "Give and Take: Why Helping Others Drives Our Success". Givers gain more than takers.

No. Really no. I was not expecting that number of downloads.

Thank you for all the people that help us to improve it and use it.
Thank you @AlessioGiombini for the challenge and hope that we can bring new features soon.

Best of luck on your #Skype4B deployments.
Posted by Alberto Nunes at 22:51 No comments: